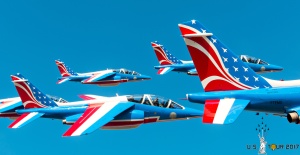 Norfolk NATO Festival will host Patrouille de France – referred to as the French Blue Angels – April 28 & 29 over the skies of Norfolk, Virginia.

Patrouille de France (PAF) is the precision acrobatic team of the French Air Force. Originating in 1931, the 8-jet team is the world’s oldest and most skilled flying the Dassault/Dornier Alpha Jet. PAF is touring the United States for the first time in more than 30 years.

In Norfolk, Patrouille de France will make three public appearances, including a traditional flyover at 5 PM on Friday, April 28 during the NATO Flag Raising Ceremony on the plaza of Norfolk Scope, a 10 AM flyover to begin the Norfolk NATO Festival’s Parade of Nations on Waterside Drive on Saturday, April 29, and then a full air demonstration streaming red, white and blue smoke on Saturday at 12:20 PM over the historic Elizabeth River/Town Point Park during NATO Fest.

Norfolk is home to the only NATO headquarters outside of Europe. Norfolk NATO Festival is the only event in the world showcasing NATO and the importance of the Transatlantic bond and commitment to world peace and collective defense.

Patrouille de France’s appearance is in conjunction with America’s entry into World War I, the Centennial Anniversary of Naval Station Norfolk, and the 64th Annual Norfolk NATO Festival. All events are FREE and Open to the public.